„Yes, they have that feeling, but not the skill. What happens when the passion is bigger than knowledge and skill? Energy is created. And that is rock and roll.“ from the movie 20th Century Women 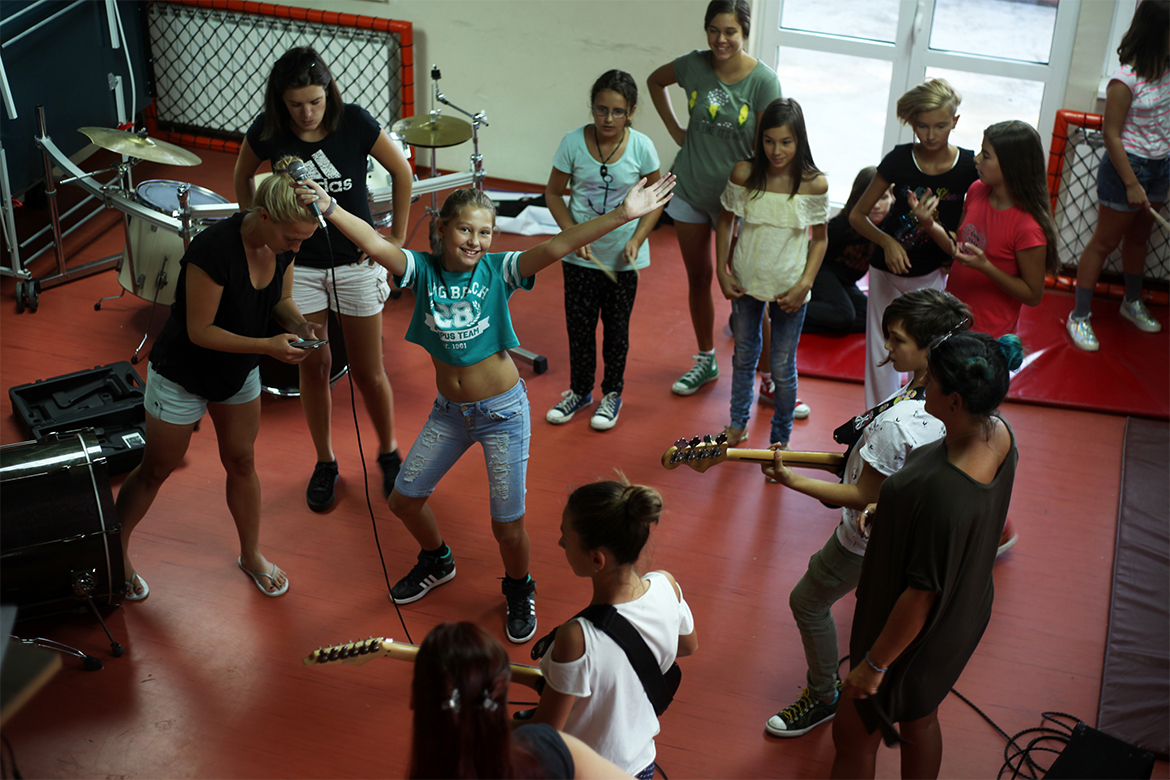 Much like the first rock camps in Portland that have started a change of gender structure in worldwide music scene, we are taking you to Avala, to the first Rock camp for girls in our region. The camp is created by the organization of members from the project Femix (insert link) and it has gathered thirty girls throughout Serbia. On all-day workshops young female rockers chose instruments that they wanted to play and practised them in the company of succesful female musicians.

Music editor of MILICA magazine, Ana Dajić has put the thesis „Rock and roll is not dead“ to a test while talking to the girls.

Rock and roll for me is when a musician or a singer starts to play and has to improvise. For example, when a string breaks and the musician starts to play with the audience while changing the string or when the singer lays on the crowd and they start guiding the singer.

A singer, but I’m not sure what genre of music.

Maybe we’ll call the band BlackCats, but surely it will be something with cats.

What is your favourite rock anthem?

I like to sing songs that I am going to play, and here on camp we usually perform „We will rock you“.

What is your favourite band?

That is loud, good and powerful music. They listen to it, but very few. I, for example, listen to heavy metal or rock and roll once a day.

You listen to hard rock too, as I can see?

My sister gave me this necklace, but I never heard of this band.

I want to be a violoncellist, but I would love, for example, to be an alchemist, painter or a designer.

My bend already has a name Tarlen because there is one girl in the band – Tara and three girls Lena. I have a band at home that is called Rokerske zvezde (Rock and Roll Stars).

What is your favourite rock anthem?

And your favourite band?

The music I like to listen the most! I love it so much! Friends from class mostly listen to turbo folk, but friends from camp listen to great music!

Well, it will be a female band, but when it comes to name and sound, I would have to ask the ones I will be playing with, will it be punk or rock.

All the songs from the band of my dad, they are called Nablesnotesni. That’s a punk band.

For me that is a good gig! And I love it because I love music! My mom always listens to rock and roll in the car, and at first I didn’t want to listen rock and roll, but then it just got inside of my head and that’s how I started to love it.

When I grow up I want to paint, draw and have a band as a hobby.

I have to see about that in the future, but surely it will be called Sok od vode (Juice of Water). I thought of that already.

I don’t have a rock anthem, or a favourite band, but my favourite song is Zombie from Cranberries.

For me, rock and roll is a type of music I cannot live without. Something I grew up with and something I am still growing up with. It is a big part of my life. Something that calms me. I think teenagers don’t listen to this kind of music enough, but I am not very pessimistic because this experience showed the opposite.

What did you dream to be when you grow up?

I dreamed of being an architect and to discover unrevealed parts of the history. Even though I reoriented to a different science, I think that now I am discovering something that we did not know could even happen here.

What kind of bands are missing from the scene?

The female metal bands are missing! Considering that most of our mentor team are female musicians that play in various bands, it would be great to see and hear more rough sounds because I think that nowadays the indie alternative sound is dominating the scene.

And what is your favourite rock anthem?

Favourite band:
There are tons. Modest Mouse, The National, Daughter, Nežni Dalibor, QOTSA i Florence and the Machine

Rock and roll for me is a way of life and a rebellion. I think nowadays teenagers are listening to it more than when I was their age. And I listened to everything then.

What did you dream to be when you grow up?

What kind of bands are missing from the scene?

I think that we have a very solid scene, but the ones with charisma, energy and originality are missing. There are less author bends, and more cover bands… I’m not really a fan of those kind of projects.

Paradoxically, one cover, The Slits- I Heard It Through The Grapevine.