YES, WE ARE OPRESSED! (bursts into laughter)

During seventies there was a heavy debate in the Norwegian newspapers about women rights, but there was a tendency I disliked, a tendency of self-pity, lamenting among women. Film Wives was something different, a self-irony.

A series of Norwegian films, directed by Anja Breien, was shown in the Yugoslav Cinematheque during October 2016. On this occasion, we talked to the shapr-tounged authoress, which stands behind some of the most important Norwegian films of the 80s. As the first woman from Norway to graduate in film directing studies in France, as well as the one who grew up with the manly cinematic influences, this rather interesting 77 year old woman remains blunt, witty and focused while talking about the equality of women. Proclaimed a feminist, and self-declared simply as a filmmaker, this authoress has been fighting for equality throughout her long career. What makes her stand out are her humorous approach to important topics, deep examination of specific problems and above all – sincerity.

Dear Anja, it is such a pleasure to meet you! First of all, I must admit, undoubtedly with a dash of embarrassment, that I haven’t had a chance to meet with your films before this retrospective. Let’s start from the film Wives which, especially in the context of the magazine, caught my attention. It is an outstandingly intelligent film, also very genuine, about women. Not to mention how contemporary it still is!

It all started from a theatre play that a few of us made, wrote and directed, and which was then performed in schools during the 70s. At that time, it was radical. There were two acts – one was the play itself, and the second one was a discussion, the female debate. I discovered that many women we thought were oppressed didn’t have that opinion about themselves. This is why I thought this film must be made. 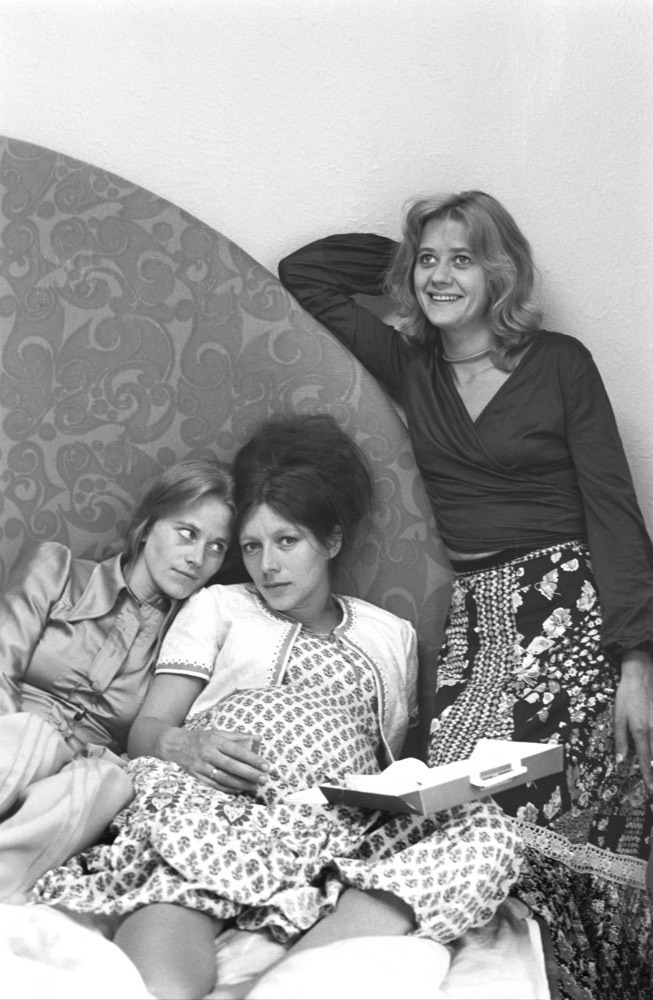 I have to agree. In our social circles, people preach to the converted. Rarely do we initiate a discussion among the audience.

And also, this is a reference, pretty clear one, to the John Cassavetes’ movie Husbands. He even wrote about Wives! But we’ve never met in person. I made two sequels, and he wanted to make a second film too, as far as I have heard.

A month ago, there was a actually a Cassavetes retrospective in the same projection room, so Husbands was also shown here recently.

The interesting thing to mention is that he is a director with a very unusual female gaze, bearing in mind that a lot of his films have women protagonists, and that he treats female subjects subtly, with an awful lot of precision.

Sure, but in that sense, my film isn’t a reply to his film, but to the situation in the ending of his film. When you think about it, men do not feel regret and panic about leaving their everyday lives as much as women do. This was my starting point in a way.

As far as I’ve read, in 1962, you were the first Norwegian woman to enroll film school in France.

Sure, but in that sense, my film isn’t a reply to his film, but to the situation in the ending of his film. When you think about it, men do not feel regret and panic about leaving their everyday lives as much as women do. This was my starting point in a way.

So you were there during the Nouvelle Vague?

Yes! I watched Vivre Ca Vie, when it opened at the Cinematheque. Every lunch time we discussed films, it was an inspiring time. For the French it was more difficult to get into the school, because they had to undergo certain preparations, so there were much more foreigners. I was the only girl on my class, to study film direction, and some of my colleagues at IDHEC were Theo Angelopoulos and Jean-Jacques Annaud.

Wow! But you were, really, the only woman among them?

Yes, there were girls at the editing or production studies, but none of them studied directing. I had to struggle to get accepted, because at first they told me: oh, you’ll get kids and then you’ll stop making films… It’s a long story. I used to say I felt like a motherless child, with a lot of fantastic fathers! We had Bunuel, Fellini, Bergman, and the only woman director we’ve ever watched at school was Leni Riefenstahl, her Triumph of the Will (laughter). Later came Agnes Varda and so on. Perhaps we saw Germaine Dulac’s silent movies, I am not sure.

So you practically started making films without any women points of reference, which is unimaginable in this moment of film history.

You can put it that way. I do not know if I thought about it as much at the time.

Do you think it doesnt make any difference, if the characters are male or female, if the subject is in the core feminine? Or in the very beginning you were not interested in the female subjects at all?

Well, you know, I made my first films about men, and with male protagonists. Afterwards I had more patience and interest for the female ones, even among these «man» stories. The subjects were pretty diverse, I would say.

Your film Wives, which we already mentioned, seems like a sort of unpretentious female manifesto. It is funny, and this approach is exactly what makes it so easy to understand the complexity of the numerous questions it addresses.

It is very important for me that the things feel natural. With some of the actresses I had worked before, on the theatre play we talked about already, and I think it is obvious; they are lovely. We improvised a lot, and we had points in the script, but we wrote it the night before, so it was all very fresh. The final scene I am especially happy about, when they quarrel in the boat, and when one of them says Yes, we are oppressed! and laughs. During the seventies there was a heavy debate in the Norwegian newspapers about women rights, but there was a tendency I disliked, a tendency of self-pity, lamenting among women. This film was something different, a self-irony.

Yes, and rather revealing. They’ve known each other since childhood and there is no possibility of concealing anything. Also, during these celebrations you reevaluate your decisions and your life. But what about the films made ten or twenty years afterwards? Did your initiative change after these years?

The climate of the discussion was colder, especially ten years afterwards, so we decided to make a film during winter, they flee during Christmas (laughter). The year the first film was made was the year of the women, the UN proclaimed it, so we unintentionally surfed on this wave. Ten years after this, I thought – okay, these women need a new film.

In the seventies, have you travelled with your films? Do you remember these first reactions?

There were many people who didn’t like Wives at first, but a friend colleague told me, years after, that he really enjoyed it! Also, critics didn’t think it was amusing at all, mostly older male critics I must say. They were still turned to male cinema, to put it that way. It was a 12 years limit for the audience, and it was actually really popular among the general public. 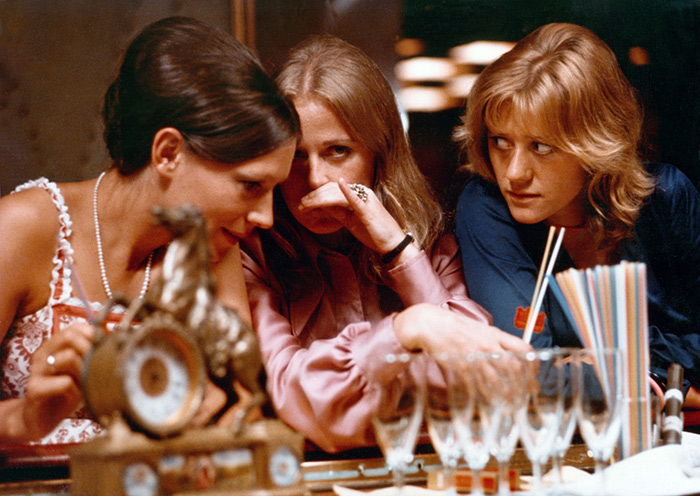 You got some very famous awards. Are they truly of any importance or do they come handy in film business?

It can help, of course, especially the Cannes nominations. We had many female directors in Norway, but cinematic tradition was patriarchal. It was a male playground, so it bursted in the 70s and we could get money for our films more easily. We had state companies who gave us money and had much more trust in us as authoresses then. Now it is more difficult to finance films, it takes away the possibility of actuality of a feature film today.

Yes, you must look into the future and think about what will remain relevant. And also specific stories are being searched for by the funds, which is ridiculous.

I am in contact with younger generation in Norway, and they are doing everything to make cheaper films, which is crucial. I met a lot of them, recently I was invited to one of their meetings. I had masterclasses, but I am not fond of speeches, I do not preach, I am looking for a dialogue. In a debate, everything becomes more alive and you can make points.

The passivity is a huge problem, you need to raise questions and voices. You, as an author, can also get something from your audience this way.

Absolutely, I belong to another time of filmmaking and I am eager to hear opinions. And when they ask me if it’s difficult to be a woman in the industry, I must say it is more of a problem to be old (laughter).

When they celebrated 50 years of Cannes Film Festival, there was a meeting of all the women directors who were in competition, and there I met Jane Campion whom I was really impressed by. She was also the only female to have gotten the award, and she looked stunning when they stood to be photographed, with all these men in tuxedos; she was wearing a grey dress, but I told her: you should’ve put a red one!

Are there any contemporary women directors you admire?

When they celebrated 50 years of Cannes Film Festival, there was a meeting of all the women directors who were in competition, and there I met Jane Campion whom I was really impressed by. She was also the only female to have gotten the award, and she looked stunning when they stood to be photographed, with all these men in tuxedos; she was wearing a grey dress, but I told her: you should’ve put a red one! There are many young women directors in Scandinavia, they are putting female characters in the usual male roles, and it is very important to see these different angles. The film school in Norway takes 50% of men and women, but women somewhat disappear after the school. In this sense, we needed a positive discrimination, so the government offered money for female directors, but they refused – they didn’t want any priviledge for being women.

Well, I must say I agree. Being equal means getting funds if you have a good idea, and not if you are a woman.

And the tendency to call a certain amount of women a cinematic wave is also a silly thing nowadays. We had a true wave back then, in the 70s, but we never called it that way; we can only name it a wave when we are looking back.

It is now more of a marking tool, of course.

Bearing that in mind, I do think we need a new wave again. A small one will be enough (laughter).

A small one we will make, then! Thank you Anja.